No mistake
Though slightly diluted by the latest bout of shock-and-awe Bitcoin news, the CME Group’s Ether Futures launch is unlikely to end up as a historical footnote. For one thing, there’s every sign that the exchange expects Ether futures to play a role in the crypto ecosystem that’s just as significant as its well-established Bitcoin Futures, which began trading in December 2017. In fact, with Ether, the exchange followed its Bitcoin playbook almost down to the letter.

Like-for-like
As with Bitcoin, the CME evidently took pains to ensure its new ETH contract specifications matched contract specs of conventional assets as closely as possible. Key details of Ether Future specs include that it’s using the same contract unit integer as Bitcoin, though a different multiple: 50 Ether per ETH contract vs. 5 Bitcoins per BTC. Same for the permitted minimum price fluctuation, with BTC’s minimum of 5 per Bitcoin ($25) turning out to be a multiple of the one set for ETH (25 cents, i.e., $12.50 per contract).

The prescribed lowest price fluctuations for a CME crypto futures calendar spread (a type of hedged trade) is 1.00 per Bitcoin, meaning $5 a contract, whilst for ETH its 5 cents, which equates to $2.50 per contract.

So, apart from a utility motive in designating ETH contract details, with the exchange cognisant of Ether’s notionally lighter turnover relative to Bitcoin, there’s little doubt the CME has also tried to foster an air of familiarity for traders interested in its Ether futures.

A new Future for an old Benchmark
Likewise, not the least among standout hallmarks of CME ETH is that its Final Settlement Procedures are structured pretty much identically to CME BTC. You can expect your open Ether positions on the Last Day of Trading to be ‘delivered’ in cash (U.S. dollars) with reference to CME CF Ether-Dollar Reference Rate (ETHUSD_RR). The regulated benchmark was developed in partnership with the CME Group and has been administered by CF Benchmarks since May 2018.

Just as it did by opting to settle Bitcoin Futures with the CME CF Bitcoin Reference Rate (BRR), the exchange has ensured zero wiggle room for doubt about the accuracy, compliance, integrity (meaning market integrity, in the regulatory sense) about its underlying Ether market. (Full CME ETH specs here).

So, why now?
It all adds up to an offering that’s aimed squarely at CME’s crypto ‘consumers’. To be sure, as an addressable market, these consumers are very different from most consumers in the typical sense! Yet, by now, they’re a definable and established market.

In that respect, the next most obvious question – ‘why now?’ – largely answers itself. True, Ether’s status in crypto market dominance remains at Tier Two, with a free-float capitalisation of $123.175bn vs. Bitcoin’s $440bn, according to CF Benchmarks’ most recent assessment from the end of January. Although Ether’s market value is still just slightly more than a quarter of the value of the ‘original gangster’, the CME has evidently satisfied itself that an addressable marketplace of institutional Ether participants is as real as the one for Bitcoin.

How big is the institutional market for Ether Futures?
Accurately assessing the size of that market is problematic, to be sure, at least externally. Assuming that a subset of BTC Futures traders would probably trade ETH only takes estimates so far. In fact, the whole institutional market for crypto is almost as obscured as it is for other ‘alternative’ asset classes. And with the SEC’s 13F disclosure regime facing an inexplicable move towards reduced transparency, trends that have typically seen info on major crypto investors increasing, could be set to reverse, making the institutional crypto market even more of a mystery.

As such, Grayscale Ethereum Trust (GET) in October becoming an SEC Reporting Company, was a major help. (Grayscale trusts are exclusively institutional). Grayscale’s end-2020 summary revealed that GET weekly inflows averaged $26.3m in Q4, accelerating above an annual average of $15.2m a week.

Of course, Grayscale Ethereum Trust inflows can’t be a perfect metric as a proxy for the likely growth of CME Ether Futures volumes. Like the volume growth of CME’s Bitcoin Futures though, GET inflows are promising.

Here’s how CME Bitcoin Futures Open Interest looked at the beginning of this week. 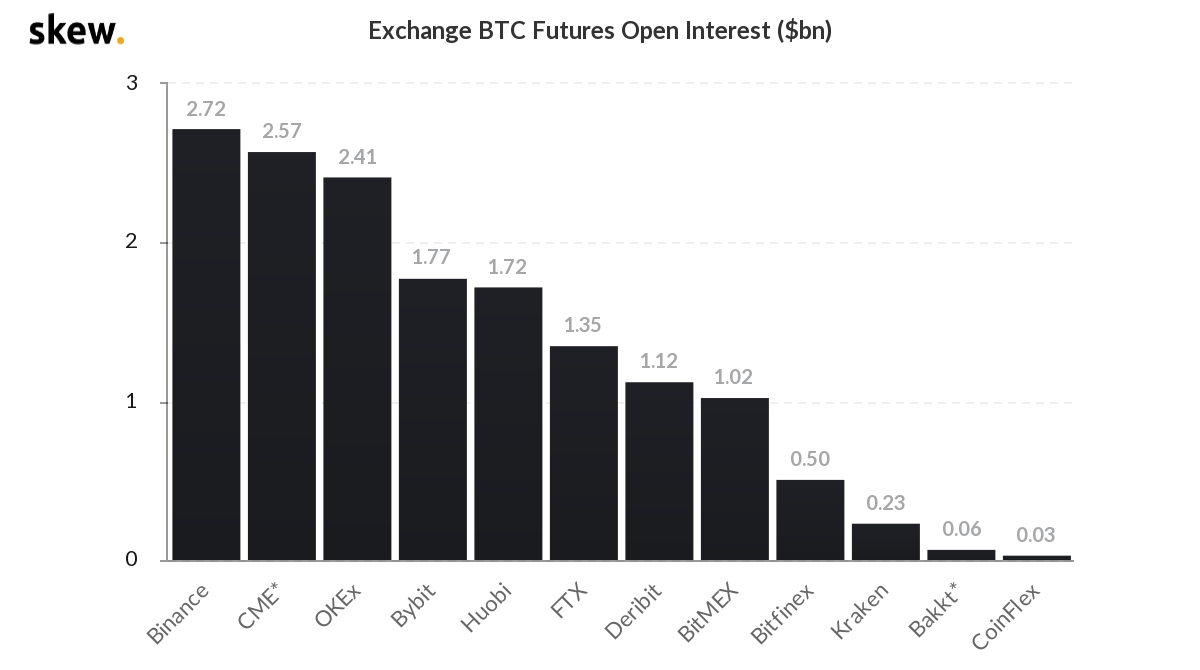 The chart confirms that the largest regulated U.S. futures exchange is second only to Binance in terms of open Bitcoin positions. In fact, CME has occupied the Number 1 spot several times in recent months. Most importantly, even as Bitcoin volumes boomed across the board in 2020 in step with crypto prices, CME jumped from 7th to second-largest major exchange in terms of open interest volumes in the year to end-October 2020. Furthermore, CME’s current Bitcoin open interest of $2.57bn equates to staggering growth compared to $790m at October’s snapshot. 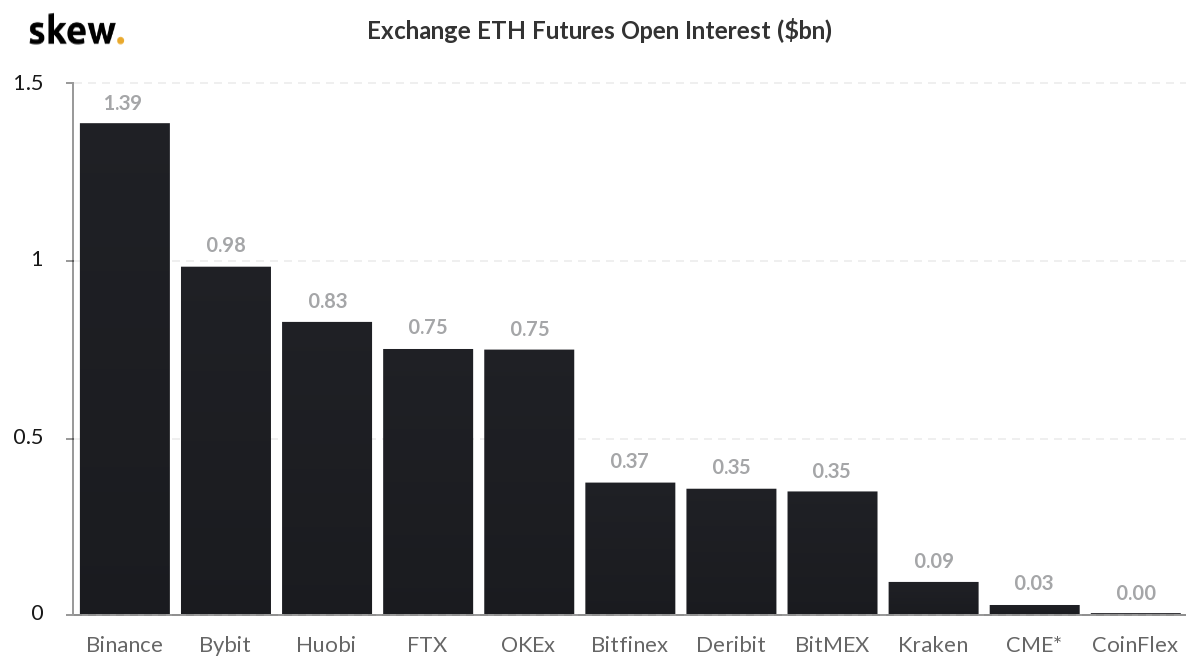 And yet, with about 19,000 ETH (388 contracts), worth some $33 million turned over on the first full day of trading, interest in CME ETH can’t be characterised as having been low.

In other words, the gambit that the only fully regulated Ether market could fare as well as the only end-to-end regulated Bitcoin Futures market looks well-founded for now.

Plug 'n' play
As Tim McCourt, the CME Group’s global head of equity index and alternative investment products indicated, in a podcast hosted by The Block, the exchange expects the ‘plug ‘n’ play’ convenience of institutions already trading other CME products, plus the unmatched regulatory robustness, accuracy and replicability of the ETHUSD_RR benchmark, to make ETH futures as much of a slam dunk as CME BTC has been.

Only time will tell whether the gambit will prove to be the most astute choice the CME could have made at this juncture. But with Tesla buying Bitcoins whilst Ether joins the majority of the asset class in setting multiple record highs and institutions clamour to invest, there’s a growing sense of inevitability about crypto’s march to the mainstream - and the regulated route institutions will be obliged to take to follow the asset class there.