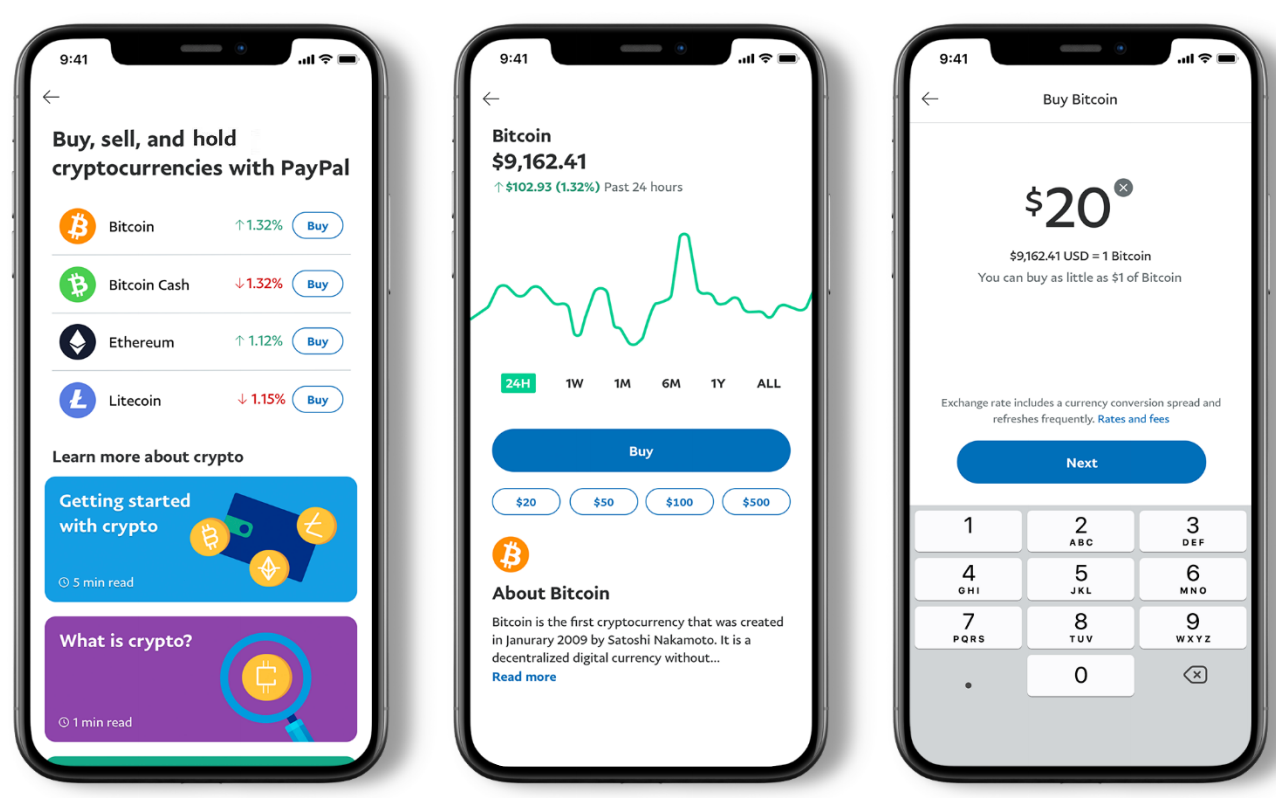 It is said that every revolution has a ‘tipping point’. And whilst crypto ‘mainstreaming’ may lack such a dramatic watershed, PayPal’s announcement that it will soon “enable cryptocurrency as a funding source” is as valid an inflection point as any. It will begin rolling out such services in the U.S. within weeks. The $239bn group with 346 million active users will then instantly become the biggest enabler of consumer crypto adoption by virtue of being the largest retail platform with digital assets on its network. Having also secured the first ever “conditional BitLicense” from the State of New York, the group is completing a journey it began in 2013 when it acquired Braintree, already by then a leading proponent of crypto payment tech. Several rounds of steps forwards and backwards followed before PayPal filed patents in 2018 aimed at speeding up crypto transactions. With numerous internal financial issues unresolved, PayPal’s crypto services will be limited to begin with (for instance, it hasn’t detailed how it may independently value crypto collateral in a future credit offer.) Nonetheless, crypto passed the point of no return this week. Read more here.

Bitcoin and Litecoin crown PayPal news
There was no mistaking the crypto market’s verdict on this week’s key industry news. In the hours that followed PayPal’s announcement, Bitcoin advanced past its nearest ‘psychological’ round number, the third time BTC/USD exceeded $12,000 in as many months. But an added charge was evident given that the rate surged on to the threshold $13,000 within 24 hours. Litecoin, in which PayPal will also permit transactions outperformed all cryptos with a leap of 10% on the day. CF Benchmarks’ volume data, derived from a meticulously selected, continuously monitored and frequently reviewed set of exchanges, painted a more nuanced picture of the trading reaction. In the end though, our benchmark prices confirmed the crypto market’s unequivocal welcome of the week’s events.

The Returns
Gold, the store of value investors traditionally flock to in uncertain times, has indeed risen around 30% this year. However, the CF PAX Gold Dollar Settlement rate reveals gold returned a paltry 5.6% in the recent quarter. CF Benchmarks’ Bitcoin Reference Rate is up 41% since 1st July. 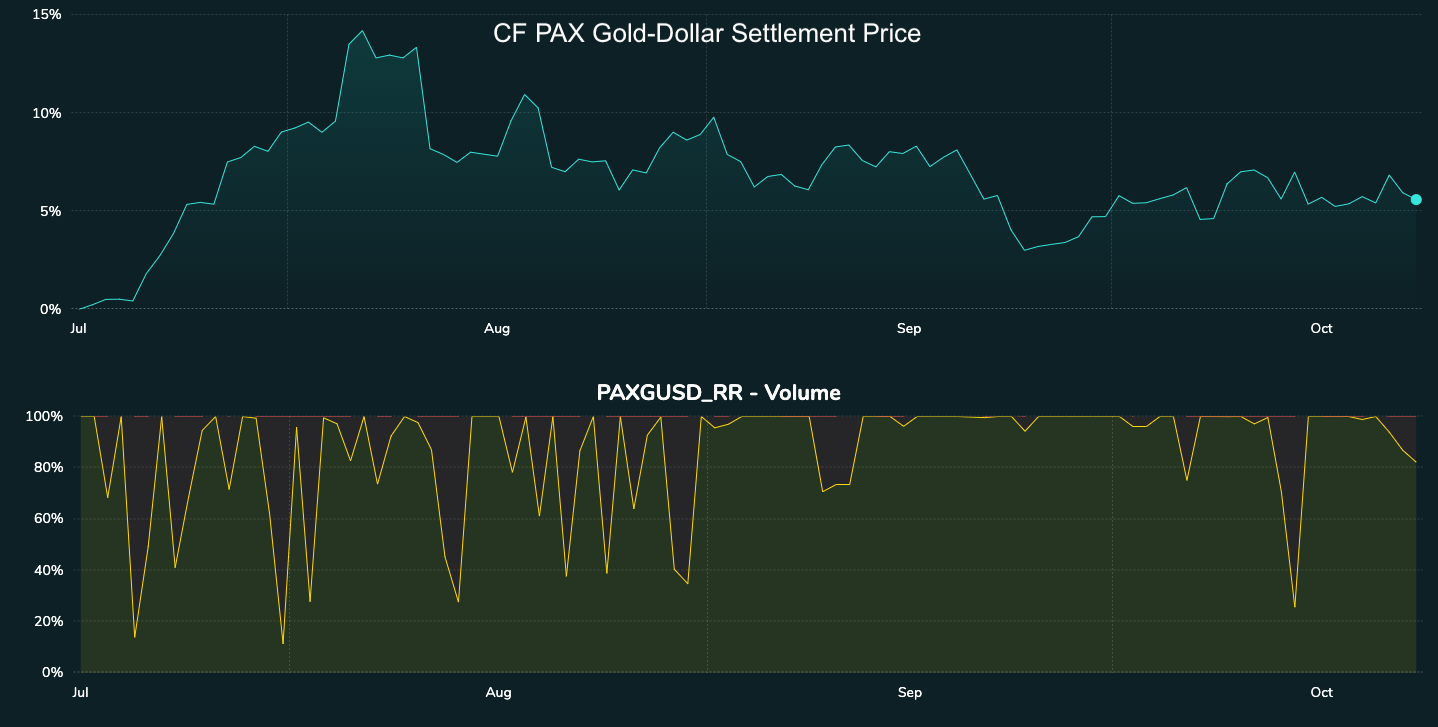 Buyers took their time to back a third move above the $12,000 mark within three months

Strike three
The third time’s a charm, perhaps. Few things get traders talking as much as when the price of an asset hits a nice, round, ‘psychological’ number. With Bitcoin’s infamous disconnect, quite by design, from the type of ‘fundamentals’ that encumber traditional markets, excitement and celebration (if the milestone is an upside one) can be even more intense than for mainstream assets.

So, make no mistake, though 2020 has seemingly been crammed with major cryptocurrency happenings, Bitcoin crossing the $12,000 mark—for the third time this year and for the second in two months—is still quite big.

As is typical for such moves, circumstantial triggers have been abundant. Still, considering the proximity of news surrounding MicroStrategy, Square, Stone Ridge, not forgetting Grayscale’s latest achievements, followed this week by PayPal outlining its crypto offering, and maybe including UK fintech Mode’s relatively minor news—the corporate adoption story looks like a compelling corollary; even if resurgent mainstream ‘risk appetite’ once again appears to have played a part. As ever, attempting to draw definitive conclusions is as difficult as it is unwise.

Buyers becalmed
Utilising, CF Benchmarks’ uniquely empirical Bitcoin price data set, what we can say for sure is that Bitcoin/USD’s third crossing of the $12,000 barrier in 2020 (the others having occurred in July and August) is that market participants did not seem to be immediately fussed with the precise milestone on this occasion.

CME CF Bitcoin Real Time Rate (BRTI) is constituted of price data from 5 rigorously screened exchanges. The data are then subjected to multiple computations and tests to eliminate anomalies and potential manipulation before admitted to the index. The methodology is an obligation enforced by CF Benchmarks’ authorisation as an official Benchmark Administrator from the FCA. In other words, BRTI price and volume data really are standard benchmarks for crypto markets.