Ethereum 2.0 vs. Elections
Think of an event, with a years-long run up amid fraught anticipation, every detail of which has been heatedly ‘debated’. Now, it’s finally happening, but it won’t be completed for an additional protracted length of time; and its far-reaching consequences will take even longer to materialise. Yes, all that applies to both the U.S. election and Ethereum 2.0. Odds for a victory by the Democratic challenger have shortened, but a definitive result could still be weeks away. Yet uncertainty hasn’t harmed crypto, for reasons explained here. News that the long-planned policy switch for the Ethereum blockchain finally has a hard launch date was arguably more important. True, Ether’s jump back above $400 may have had as much to do with the strong correlation between major digital assets and conventional ‘risk assets’ that also propelled Bitcoin above $14,000 and $15,000. But there’s little doubt that Ethereum’s transition to proof-of-stake from proof-of-work will—eventually—ease ‘gas’ (transaction) costs as scalability improves. There’s little risk of a planned or unplanned hard fork just yet though. Phase 0 of the mainnet launch is the first of many. But as per the election, much Ethereum uncertainty remains. Our Hard Fork Policy, that governs supply decisions in the event of protocol changes, is worth getting familiar with.

Bitcoin vaults $13k-15k, but $20k unlikely
Bitcoin’s peek above the $15,000 threshold on Thursday crowned its run of milestones in recent months (including 100 days above $10,000) confirming a phase of strong momentum. Sentiment continues to fuel hopes that price may eventually retake the ultimate nearby ‘big-figure’ of $20,000, for the first time since 2017. As CF Benchmarks CEO Sui Chung pointed out though, the options market begs to differ that $20k will be seen anytime soon.

Huobi talk hogwash - Huobi
Persistent talk that a senior executive of Singapore-based Huobi was arrested would continue a run of law enforcement action against crypto exchanges seen in recent months, if accurate. The seven-year old venue, which passed the $1-trillion-in-trades mark in 2018 said: “All of Huobi’s management team members have been accounted for and have not been detained or arrested.” Huobi Exchange, which is not authorised to operate in Europe or the U.S., also assured customers that their “assets are safe”. Blockchain trackers have reported both multimillion-dollar withdrawals and deposits into Huobi-related addresses in recent days.

The Returns: Bitcoin Reference Rate
CF Benchmarks’ reference rates are particularly useful on days like Thursday, when Bitcoin vaulted key levels in quick succession, increasing the risk of disputed pricing. The regulated CME CF Bitcoin Reference Rate settled up 7.71% at $14,970.71, though did not print $15,000. 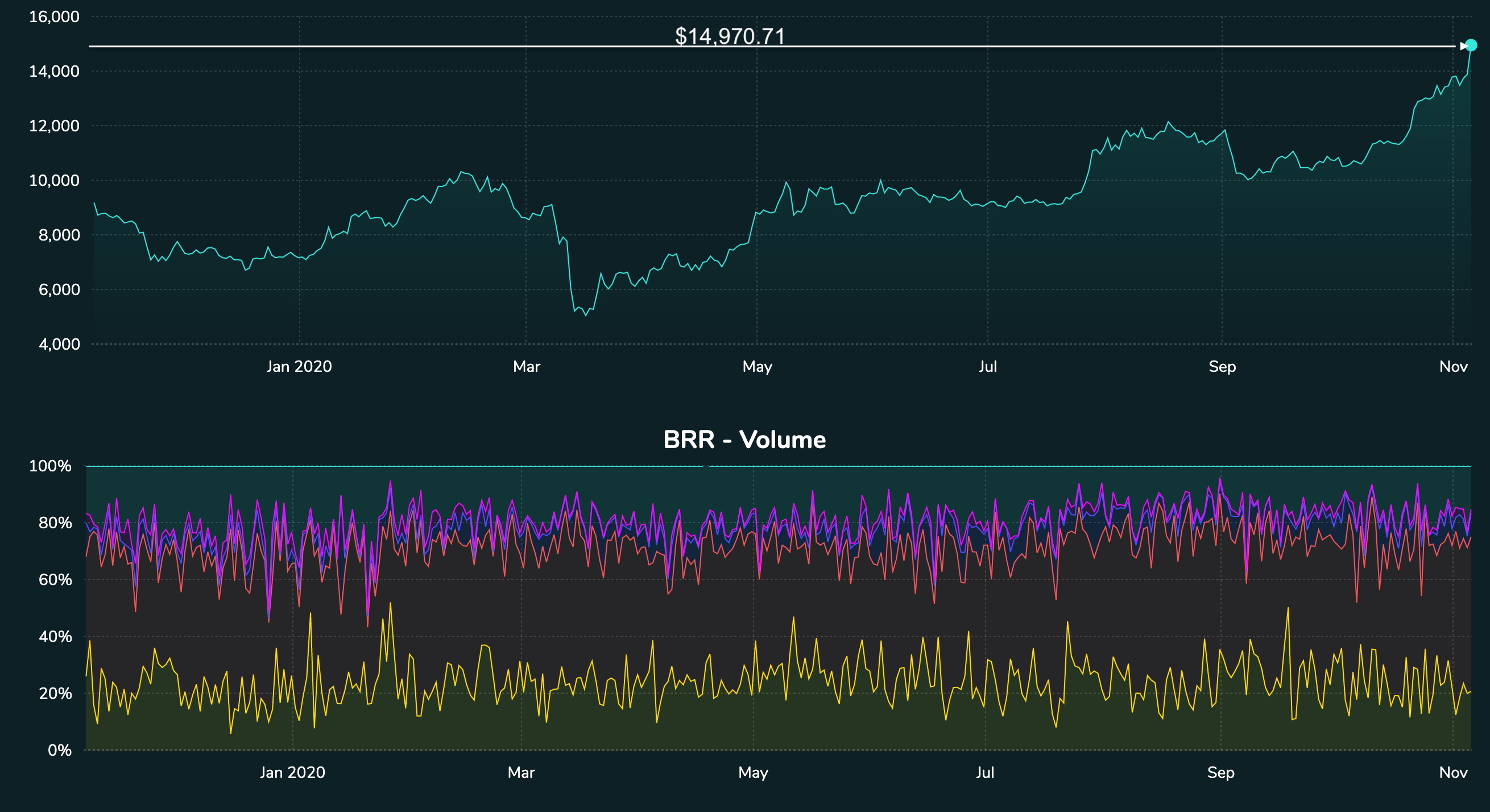 Not quite a crypto cliff-hanger

Crypto markets are moving swiftly on

The fraught U.S. election still looks more like a cliff-hanger than a clean sweep, though a few market truisms appear to be applying to crypto in full effect.

Crypto is 'risky assets' too
On those bases, though a clear election end point may still be days away, as votes continue to be counted, wrangled over, and possibly even argued over in court, it’s clear that stocks and other risky assets—including crypto—are taking cues from clear probabilities and a handful of certainties in the bag so far.

Known knowns and known unknowns
The above said, as this article went online live, voting trends were trimming the lack of clarity to an extent. Senator Joe Biden had notched up more votes than any other Presidential candidate in history, even if the path to an electoral college victory was more ambivalent.

He had also won the critical swing state of Wisconsin, though the President held four other swing states to Biden’s 3 swing wins. Even more speculatively, signs have been emerging that—not for the first time in recent history—Wall Street is beginning to veer away from its traditional Republican bias, implying that the controversies of Trump’s Presidency are taking a toll.

Read the rest of this article on our website