Crypto markets are moving swiftly on

The fraught U.S. election still looks more like a cliff-hanger than a clean sweep, though a few market truisms appear to be applying to crypto in full effect.

Crypto is ‘risky assets’ too
On those bases, though a clear election end point may still be days away, as votes continue to be counted, wrangled over, and possibly even argued over in court, it’s clear that stocks and other risky assets—including crypto—are taking cues from clear probabilities and a handful of certainties in the bag so far.

Known knowns and known unknowns
The above said, as this article went online live, voting trends were trimming the lack of clarity to an extent. Senator Joe Biden had notched up more votes than any other Presidential candidate in history, even if the path to an electoral college victory was more ambivalent.

He had also won the critical swing state of Wisconsin, though the President held four other swing states to Biden’s 3 swing wins. Even more speculatively, signs have been emerging that—not for the first time in recent history—Wall Street is beginning to veer away from its traditional Republican bias, implying that the controversies of Trump’s Presidency are taking a toll.

Volume sentiment
During pivotal geopolitical events like the current one, we have found that trading volumes at Constituent Exchanges from which CF Benchmarks derives prices for its FCA-authorised benchmark crypto indices provide clear insights into market sentiment.

Charting volumes from late-night Tuesday UTC (when many large U.S. polling stations would close) through to the early hours of Wednesday, we can see (in Figure 1.) that the most remarkable volume in that time frame was during the trading hour of 23.00 UTC. 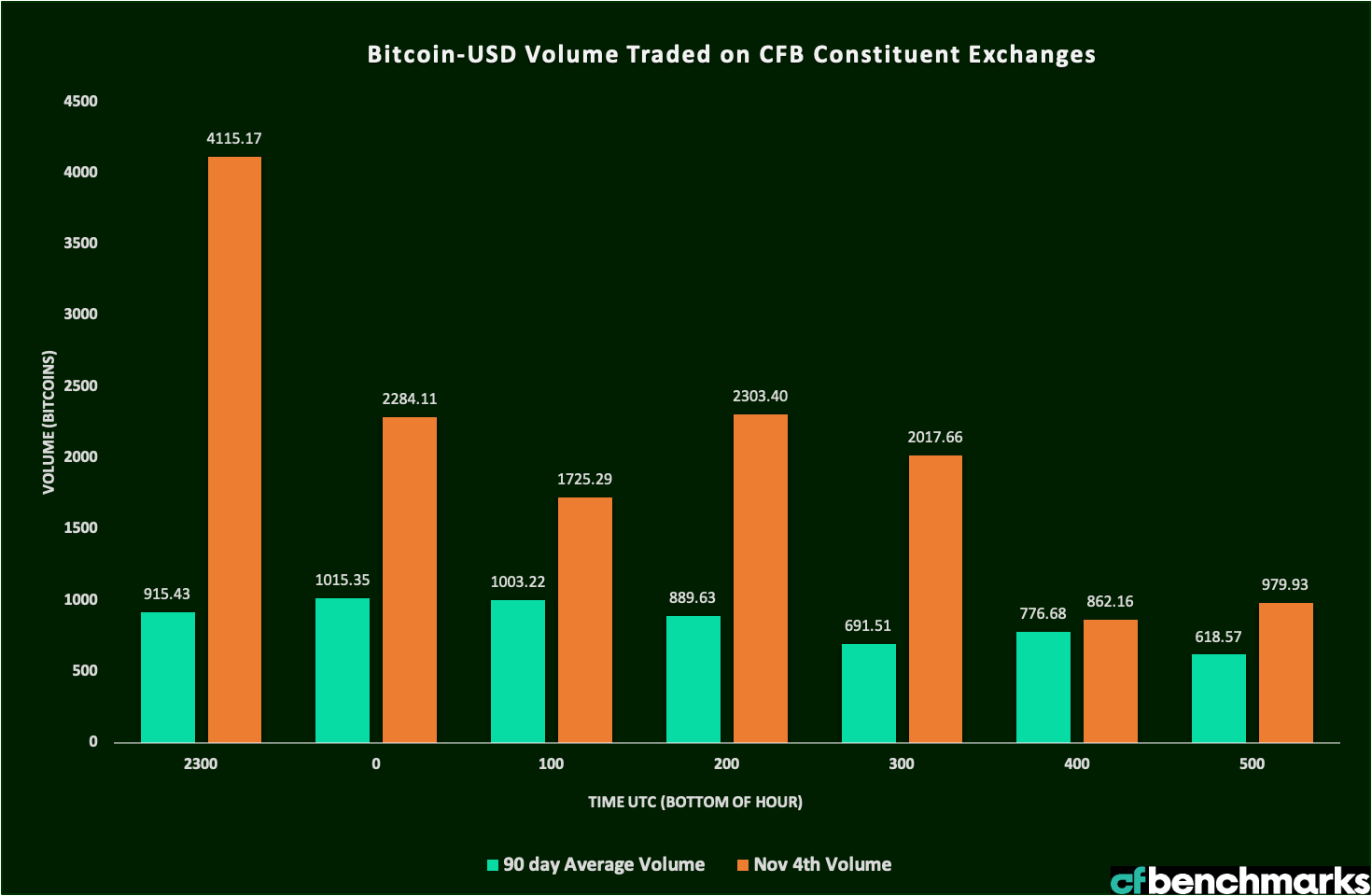 The surge in turnover was tantamount to 4.5 times the rolling 90-day average. It’s difficult to peg the jump to any clear cause. A barrage of tweets at that time from Donald Trump, perhaps? Or on the other side of the fence, possibly the emergence of news that there would be no quick, decisive win for the incumbent was the trigger. In any case, the expansion of turnover was not sustained in the hours that immediately followed.

Relatively steady volumes since the spike do not necessarily demonstrate that the crypto market has been less on tenterhooks than anyone else amid an election that remains too close to call approaching 24 hours since polls closed.

Suspense, but no crypto drama
However, the data also show that despite the suspense, crypto traders are neither particularly spooked nor particularly euphoric about the U.S. election so far. As we’ve seen, there are clear reasons to expect Bitcoin sentiment to remain unperturbed regardless of the eventual outcome. Crypto continues to track stock market relief that corporate America probably won’t face immediate challenges either way.

Note: The CME CF Bitcoin Real Time Rate (BRTI) is constituted of price data from 5 rigorously screened exchanges. The data are then subjected to multiple computations and tests to eliminate anomalies and potential manipulation before admitted to the index. The methodology is an obligation enforced by CF Benchmarks’ authorisation as an official Benchmark Administrator from the FCA. In other words, BRTI price and volume data really are standard benchmarks for crypto markets.