Our latest research confirms that the CME CF Ether-Dollar Reference Rate (ETHUSD_RR) is the most trustworthy Ether market, with prices that are consistently achievable at an institutional scale

Trading of the CME Group’s new Ether Futures contract, which settles to the regulated CME CF Ether-Dollar Reference Rate (ETHUSD_RR) is off to a solid start. 1,856 contracts were traded in CME Ether's first week, worth around 92,000 Ether. It's a promising gradient of early volume growth that backs the view that institutional participants have been chomping at the bit to participate in the market of the second-largest cryptocurrency.

Looking at the expansion of the DeFi market—which owes almost all its existence to Ethereum’s ERC-20 protocol—part of the impetus behind demand for Ether is obvious. It’s worth noting that, in partnership with the CME, CF Benchmarks launched ETHUSD_RR as early as May 2018. Therefore, there’s good reason to assume that the timing of the exchange’s launch of Ether futures, almost three years later, was deemed to be optimal.

What’s more, the CME’s decision to go ahead with the launch on 8th February was in itself an endorsement of the integrity, representativeness and accuracy of the Ether market that underpins ETHUSD_RR: ETHUSD_RR Constituent Exchanges. After all, both the Constituent Exchange criteria and the overarching index methodology upheld by CF Benchmarks are an obligation of its role as an EU-authorised Benchmark Administrator, with active oversight by the UK’s FCA, an arrangement that the EU has confirmed will continue on an equivalent basis now that Britain has left the European Union.

It was by way of continuation of these rigorous policies that we decided to undertake a comprehensive examination of the qualities and capabilities of the Ether-Dollar Reference Rate, and then to publish the results in a formal paper that would remain available ‘on the record’ for scrutiny.

An empirical evaluation of ETHUSD_RR in a nutshell

Key findings and takeaways
ETHUSD_RR input prices from Constituent Exchanges are highly correlated:
An analysis was undertaken of the pair-wise correlation of prices from Constituent Exchanges on a per-minute basis (the price difference between transactions for each minute at each exchange) during the 366-day observation period. The data are summarised in the table below.

The clustering towards correlation coefficients of 1.00 demonstrate a strong price correlation between Constituent Exchanges.

In turn, the strong price correlation is evidence of a lack of manipulation within Constituent Exchange prices that might potentially have occurred on a smaller scale than would be captured by CF Benchmarks control procedures (such as the Potentially Erroneous Data Parameter) and to which the ETHUSD_RR is immune due to its aggregate construction. (Read an explanation of our Potentially Erroneous Data Parameter.) Takeaway: There’s solid evidence that ETHUSD_RR has not been subject to manipulation through manipulation of prices on individual Constituent Exchanges.

ETHUSD_RR comprises sufficient volume to be valid as a benchmark:
Note that on average 18,305.82 Ether were traded over an average of about 4,134 transactions, worth an average $5,829,964.62 during the one-hour observation window of 15.00 to 16.00 London Time. (Prices were contemporaneous with when the trades were observed.)

Takeaway: Although the paper acknowledges some uncertainty about the proportion of the broader Ether market represented by ETHUSD_RR, such uncertainty reflects broader unknowns about typical institutional transaction sizes. As well, there is strong evidence that institutional orders are typically conducted over multiple transactions anyway. On that basis, it is highly likely that the daily volumes found to be transactable at the ETHUSD_RR price will prove to be sufficient for most institutional purposes.

The ETHUSD_RR price is replicable:
Volume data summarised above represents evidence of the ‘achievability’ (another word for ‘replicability’) of the ETHUSD_RR price. However the paper also prescribed a close observation of much larger daily transaction volumes of Ether for the specific purpose of simulating the extent of ‘slippage'.

The exercise described in the paper was aimed at removing any lingering doubts about the ability of the ETHUSD_RR price to sustain multiple large-scale Ether purchases every day whilst remaining replicable to a high degree. Multiple purchases of Ether were simulated on each of the 366 observation days: the goal was to complete one purchase of Ether per second during a 3,600-second calculation window, until 500 Ether had been purchased.

Defining slippage as the percentage difference between the replication price and the ETHUSD_RR itself, results of the slippage analysis are presented in the graphic below. 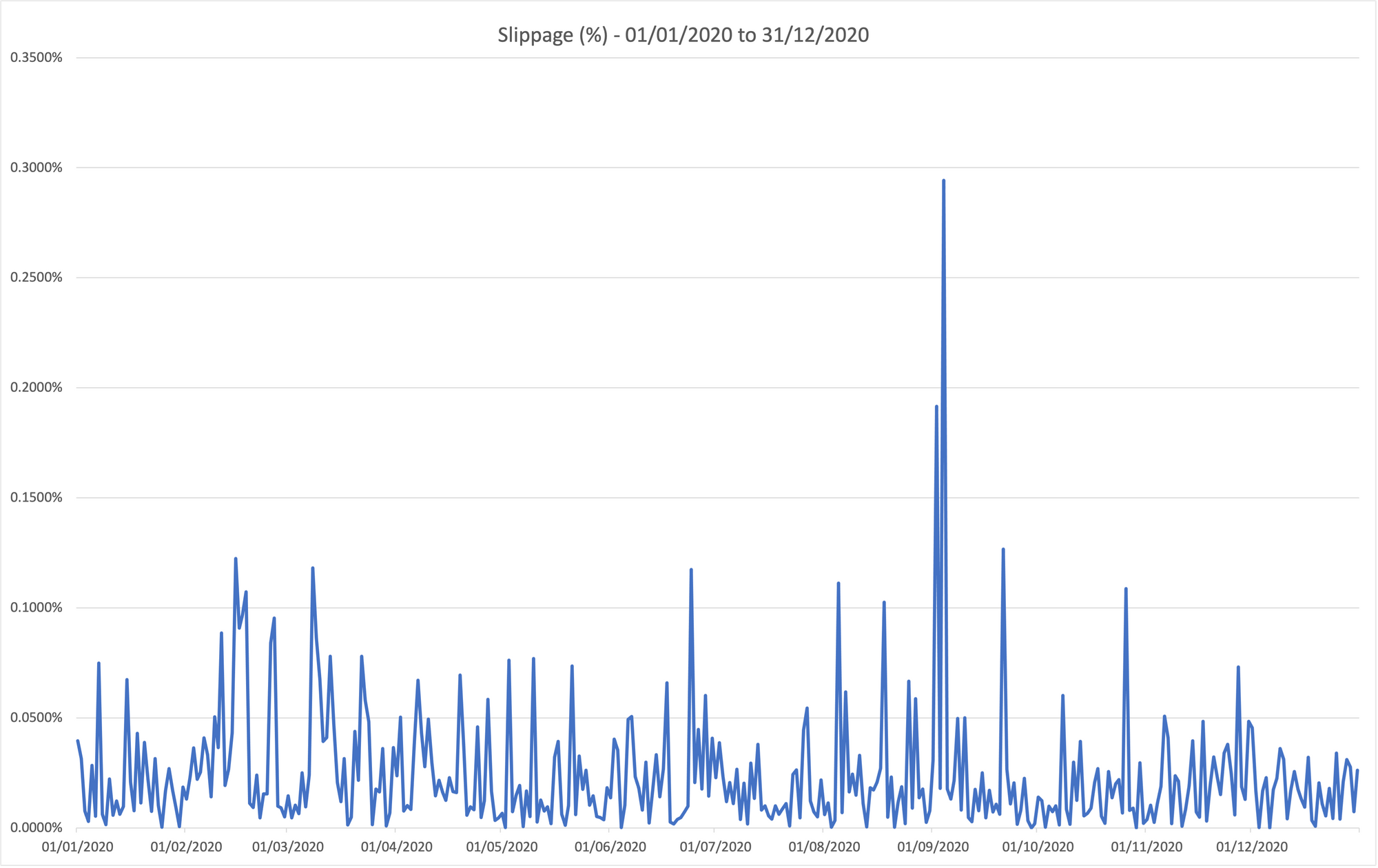 The chart’s obvious standout data point show’s an anomalous ~0.3% slippage on one day of the exercise in September 2020. That was the maximum slippage observed on a single day during the observation period with the remainder of values congregating approximately within the range of 0%-to-0.15%. Takeaway: slippage can be described as having been negligible during the observation period.

READ OR DOWNLOAD THE FULL RESEARCH PAPER: An evaluation of the CME CF Ether-Dollar Reference Rate as a benchmark for regulated financial products