Routed, not Rekt
To those for whom the spectacular price moves of the week were completely unforeseen - including Bitcoin’s drop by as much as 16% in about 24 hours - welcome to the wonderful world of crypto. More to the point is the reality that sceptics and some of the curious alike have been handed corroboration of many suspicions after Bitcoin (and other top digital assets) ended an almost three-month uptrend. On Tuesday, the regulated CME CF Bitcoin Reference Rate was up 83.94% from 2nd October’s $10,529.71 one-month low, to a new three year high of $19,368.13. The CME CF Bitcoin Real Time Index then tumbled around $1,000 within an hour of the peak, before printing a bottom of $16,221.10 on Thursday at 17.27.56 UTC. Prices have since inched higher. If (a big ‘if’) that low holds, that would offer some reassurance to buyers, whilst implying a relatively contained ‘crash’, this time. Additionally, prospects that institutional adoption intentions will be dialled sharply back look remote. In a very real sense, it may be too late. VanEck launched the latest tracker in the space, an ETN, on Wednesday. More prosaically, investment rationales remain intact. Fidelity Digital Assets, for example, expects to open its own fund “fairly soon”, said marketing chief Christine Sandler this week. Either way, post-mortems of Bitcoin’s latest failure to reach $20,000 inevitably abound. The more informative ones cite algorithmically-timed profit taking, over-leveraging, OKEx’s resumption of withdrawals and more.

Ethereum staked
As late as Tuesday morning, a soupçon more than 50% of the prescribed Ether (at least 16,384), required to initiate Ethereum’s transition to a proof-of-stake consensus from proof-of-work, had been deposited. Then, demonstrating that multi-million-dollar pledges from co-founder Vitalik Buterin, Dubai’s IBC Group, and Bitcoin Suisse among others, were just the beginning, the Ethereum Foundation signalled an inflection point. “Genesis deposits” were “locked in” at 12pm UTC, the .org announced, a week before 1st December, scheduled date of ‘Phase 0’. Further plot twists remain likely. CF Benchmarks’ Ether indices are unaffected for now, apart from the CME CF Ether-Dollar Reference Rate marking a two-year high of $604.10 on Tuesday, up 285.91%.

“Not a fan”, just new U.S. Treasury Secretary
Janet Yellen’s next incarnation in public life could be on the other side of the table. Aside from a comment in 2018 that she was “not a fan” of Bitcoin, Professor Yellen is known as the architect of ‘QE’. The policy erodes the appeal of yield-bearing assets and is therefore widely seen as a key to the digital asset class investment case. 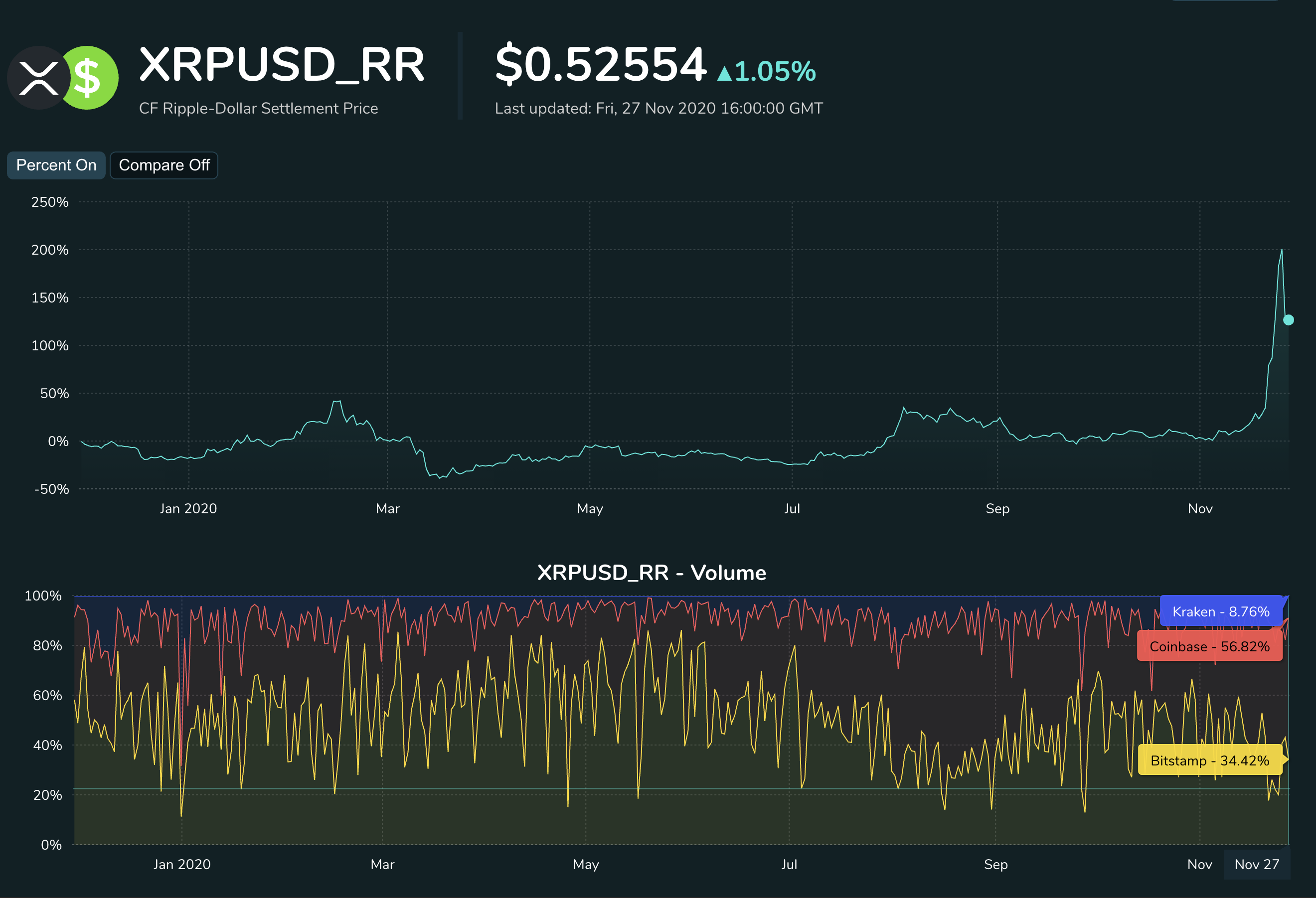 The Administrator announces the final portfolio composition and index weights for the CF Ultra Cap 5 Index.

Portfolio and weight changes will be come into effect at the Rebalance Implementation Point - 1600 New York time on Friday, November 27th.