Most avid open interest of 2020
Steady normalisation of the crypto asset class this year has gone hand in hand with increasing maturation of professional Bitcoin markets, particularly futures. So, with the largest crypto by market cap advancing to a succession of new 2020 highs this week, it’s fitting that contract open interest marked its own peak for the year too. Typically, as we noted here, there are few definitive ways of determining whether elevated open interest indicates a virtuous circle eyeing higher prices, though circumstantially at least, signs are promising. These include weekly CFTC Commitment of Traders data that track “large traders” in various professional and institutional categories. Though the most recent readings for the week through to 3rd November show ‘reportable’ BTC holdings down in almost every category, except ‘short’, ‘commercial’, institutional investors had latterly built on a previous record long, from late October. With options market sentiment also measurably at its most bullish ever this week, the best of all possible worlds appear to be within Bitcoin’s grasp; even if they still correlate rather well with the world of mainstream financial markets.

UTXO record points both ways
Bitcoin has been on a tear all year but has gone into overdrive in recent weeks, sailing through numerous price milestones and through $16,000 in recent days. That’s left the CF Benchmarks Bitcoin Reference Rate with a 2020 return of almost 91%. Ether has also reached fractionally above its previous 2020 high in September near $467 to touch a new one at $469, up 161% for the year. Broader market cheer that lifted the S&P 500 to its best levels in 10 weeks in recent days underscores the extent to which major crypto is now a part of the same sphere. More substantially, a blockchain metric that measures profitability levels of Bitcoin’s Unspent Transaction Outputs (UTXO has remained elevated for months and reached a record high of 110 million, equating to 98%, this week. Whilst not straightforward to interpret—holders could either continue to hold or be tempted to sell—in context, the news will be interpreted as an additional near-term risk to the upside.

The Returns: Bitcoin Reference Rate
Markets are notoriously fond of ‘round numbers’; hence, for instance, the fanfare as BTC/USD paced six ‘big figures’ in little over a month. The CME CF Bitcoin Reference Rate closed at $16,140.41, up 0.39% on Friday, but was up 49% since 1st October. With the year’s return now at 90.84%, the market’s gaze (human and systematic) can be expected to turn to the next significant notch of 100%. Additional volatility is unlikely to be far behind, en route.

Open interest – the volume of unsettled futures contracts – in Bitcoin, continues to run at highs for the year as shown in the multi-exchange chart below. 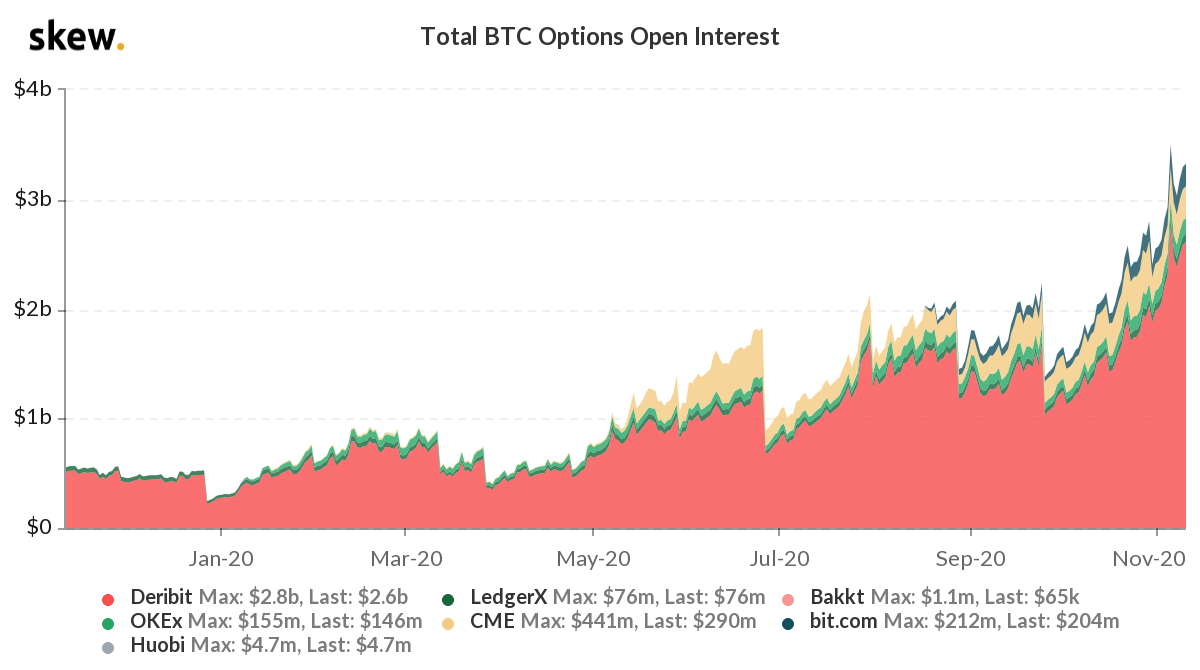 Though sentiment in the biggest cryptocurrency by market capitalisation shows every sign of a buoyancy that’s in-step with cheer tied to global stock markets and other ‘risky assets’, the blistering pace of BTC/USD’s advance—blowing through milestones ranging from $13,000 to almost $16,000 (according to CF Benchmarks’ regulated Bitcoin Reference Rate index)—has been eye-catching.

What’s more, in many ways, stakes are higher for the asset class than three years ago. In the wake of Bitcoin’s numerous adoption milestones this year, interest in crypto assets among institutional investors who aren’t already participating has seldom seemed higher. (See MicroStrategy, Square investments, PayPal’s consumer offer, Kraken Bank, The U.S. Office of the Comptroller’s custody clarification, for starters.) A high-profile price reversal, with follow-through, would be particularly inopportune right now, for the continuation of a smoother path towards greater crypto acceptance.

This intersection of attention makes continuing highs for the year in Bitcoin open interest volumes (OI) potentially important. A general rule of thumb in the modern futures market is that relatively elevated OI may be bullish for price going forward—provided that certain other market parameters are also present. In fact, long-standing statistics from more established asset classes imply that Bitcoin requires both OI and underlying volume to rise in unison with firm prices for the highest probability that prices can remain on an upward path for the time being.

Though CF Benchmarks’ Bitcoin Real-Time Index and Bitcoin Reference Rate depicts prices edging to their latest 2020 highs on Wednesday, they first approached these values last week, amid uncertainty on Main Street around the extraordinary U.S. election. As we noted at the time, despite confusing optics, there were firm reasons for BTC to rally along with mainstream markets. And the run of strong positive sentiment has extended amid an apparent breakthrough in the search for a COVID-19 vaccine. Though the current U.S. President has failed to concede to the probable incoming one, there are clear signs from all markets that investors and traders became convinced enough of the challenger’s victory to drop residual wavering several days ago.

Zeroing in on Bitcoin trading volume from the 5th and 6th November, two days after the election, as we do in the chart below, there’s no mistaking that an intensification of turnover peaked during the hour of 6 PM UTC on the 5th November. The surge was 4½ times higher than the 90-day rolling average turnover of Bitcoin traded on CF Benchmarks Constituent Exchanges. (Read the rest of this article on our website.