Not so OK
Unfortunately, it’s been another day on tenterhooks for retail crypto traders. The latest in a string of exchange debacles this year involves OKEx, the Malta-based venue which has deeper roots in Hong Kong and China.

As is often the case when digital asset exchanges run into trouble, news trickled out slowly and erratically, exacerbating market nerves and, in turn, prices.

With OKEx, things began as ominously as they commonly do in situations like these with customers suddenly unable to withdraw funds. It later emerged that the firm had suspended withdrawals. Later still, that this was due to the absence of a “private key holder”.

Co-operating
Finally, it emerged that the person was none other than founder Xu Mingxing. Reports said he was “co-operating” with Chinese authorities in a government investigation. It remained unclear at the time of writing whether or not Xu had been arrested after local reports indicated that he had been ‘taken away by the police’.

The exchange stressed that withdrawals were halted with the “best interests” of customers in mind whilst assuring that aspects of business were “stable”, and that asset security was unaffected. Late on Friday, there was anecdotal evidence that withdrawals had resumed.

No melt-down
Unsurprisingly, the market’s knee-jerk reaction was negative. Still, both the price and volume response warrant careful scrutiny, because to be sure, there was no ‘melt-down’.

As the chart of CF Benchmarks’ Bitcoin Real Time Index (BRTI) shows, traders of the main cryptocurrency demonstrated a clear selling reflex following emergence of the OKEx news in the form of an announcement on the firm’s website on Friday at around 0400 UTC. 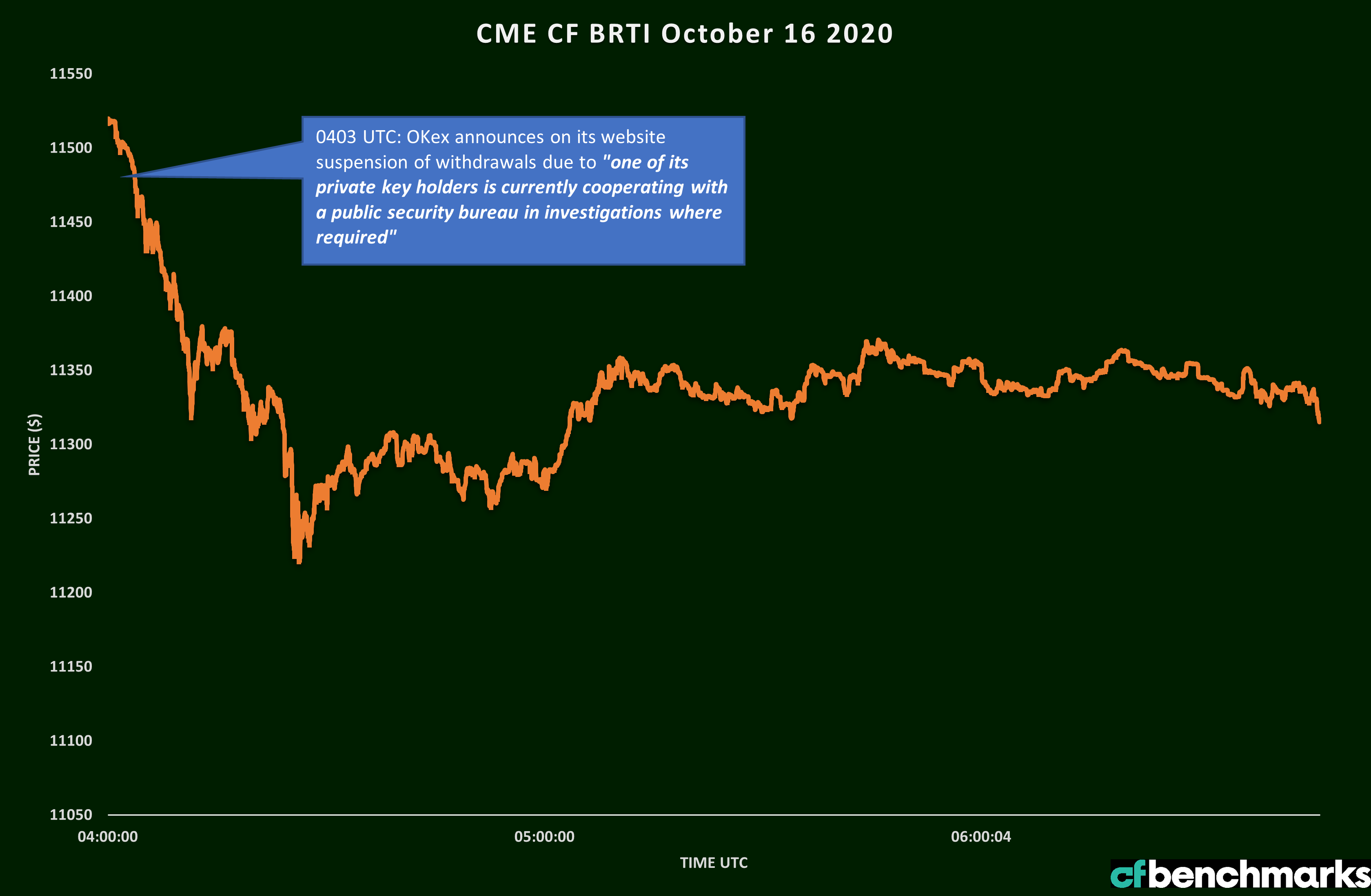 That said, prices of the regulated BRTI index, at worst, fell less than 3% in the immediate aftermath of the news. Likewise, Bitcoin traded around 0.9% lower at the time of writing, several hours after the initial news. BRTI receives data from five meticulously selected and regularly reviewed constituent exchanges before a painstaking methodology and stringent controls are applied to derive price. The determinations are all part and parcel of the EU’s BMR rules that govern CF Benchmarks status as an official benchmark administrator. So, if the BTRI fell less than 3% in reaction, it corroborates the impression that the market impact was negative but essentially moderate.

Volume verdict
Benchmark volume data provide a further level of insight. The next chart shows an almost six-fold surge in BTC-USD volume relative to its 90-day rolling average. However, activity soon reverted back to its previous approximate baseline. We can interpret that as indicating that participants certainly did not ignore the OKEx news. However, it’s also clear that traders rapidly assessed the prima facie risks tied to the revelations and their working verdict appears to be that consequent impacts are likely to be contained; albeit OKEx customers are probably less sanguine. 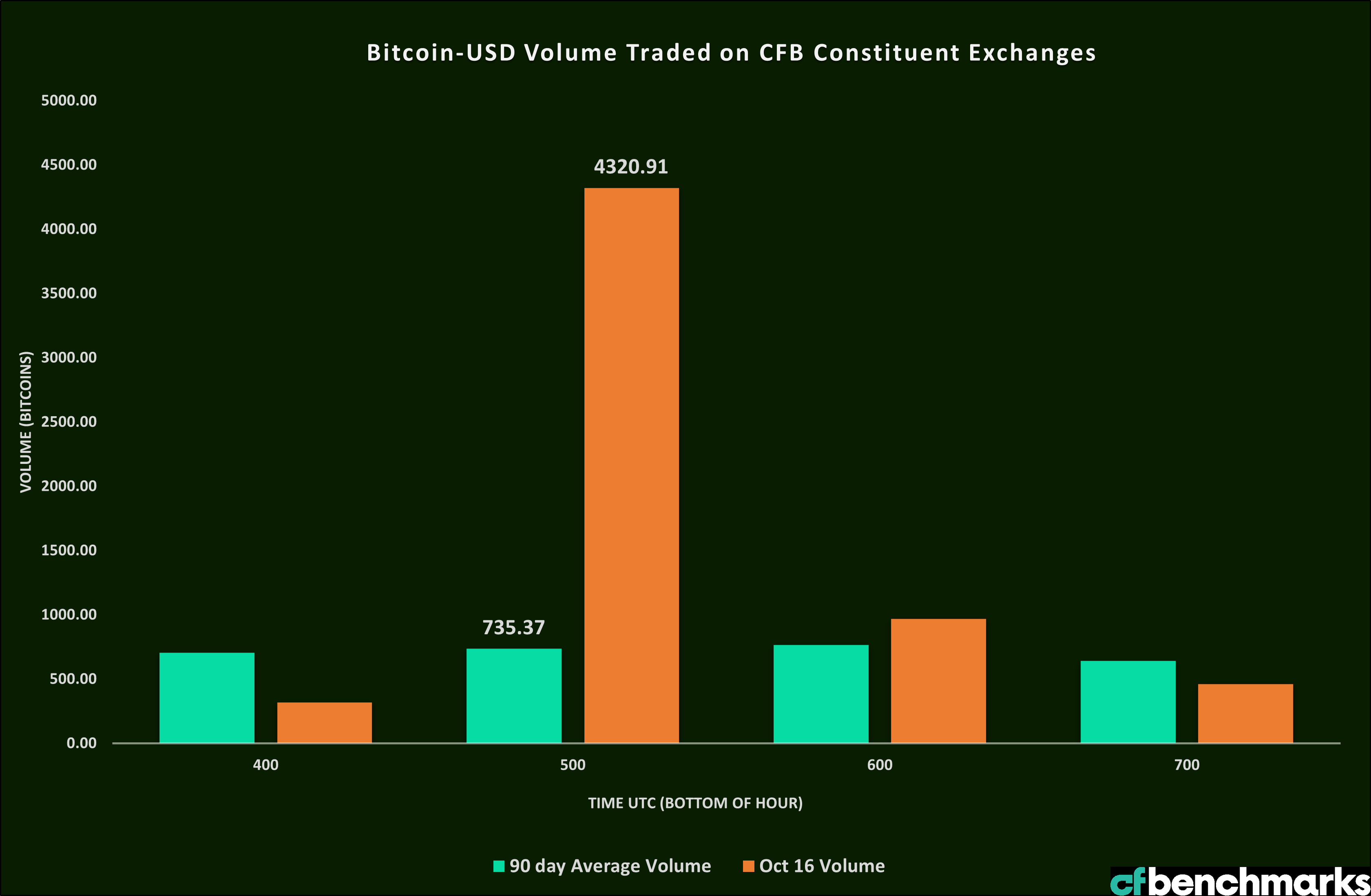 As much as the crypto industry has made great strides this year, particularly in terms of mainstream adoption, messy let-downs like Friday’s are no less common and continue to serve as a reality check to the crypto industry, retail consumers and the broader markets alike.

Still, contained OKEx impact speaks to the diminished influence of the Malta-registered venue (and Seychelles-registered BitMEX) on the crypto derivatives market in 2020. There are now more than a dozen such vendors in that asset class to choose from compared to a few years ago when the pair dominated trade.